Welcome to the second installment of “Plutonic Melodic and Harmonic,” a regular feature in (Music That Really Matters) that will spotlight guitarists from across the globe and span the musical map.

Tab Benoit is from Houma, Louisiana, and the bayou music he grew up surrounded by informs his unique take on the blues. Born on Nov. 17, a Scorpio, Benoit is 52-years-old and widely praised as among the top 5 most popular touring blues guitarists today.

On January 10 he played to a packed Sony Hall in New York City billed as a Swampland Jam, a reference to his 1997 guest-heavy live album.

Benoit’s blues aren’t what you might be used to hearing. No one else is playing the blues this way.

The country, Cajun and zydeco influences of the bayou country are extremely pronounced.  In the same way Buddy Guy’s frenetic fretwork could only come out of Chicago (yes, we know he was born in Louisiana, too) and the industrial migration that built the city, Benoit’s dazzling six-string heroics are born to the same kind of place and time.

To exemplify, in New York he welcomed fiddler Waylon Thibodeaux, harmonica and accordion-man Johnny Sansone and Big Chief Monk Boudreaux of the Golden Eagles Mardi Gras Indian tribe. It was a veritable New Orleans Jazz and Heritage Festival stage in Times Square. Bruce Springsteen/Conan O’Brien drummer Max Weinberg even joined the party. It all worked seamlessly. Special note must be made of Tab’s current drummer, Terence Higgins, a veteran of the Dirty Dozen Brass Band and sessions by Norah Jones and Ani DiFranco. Like New Orleans itself, Higgins is the embodiment of rhythm. May he stay in this band for a long time

Benoit’s audiences have become increasingly larger as his talent and generosity have benefitted from old-fashioned word of mouth. I guess the blues community still operates that way. Amen!

As a style of music, the blues is a crossroads (pun very much intended). Buddy Guy is pretty much the last man standing (and thankfully endlessly touring) of his generation. The blues-rockers of Benoit’s generation are still pretty supple and span from straight-up acoustic blues to blues-informed hard rock. A year ago, I would have said the story was in fear of ending with them. But 2019 introduced a plethora of really great players to me. I would put Christone “Kingfish” Ingram and Ally Venable at the pinnacle and both are barely north of 20.

Benoit’s style is hard to pin other than to use over-the-top superlatives. It’s tempting to use terms like pure, flowing, rocking, at one with his singing, rhythmic and fleet-fingered. Those descriptions would be correct but there’s also intangibles at play that can be heard but not expressed through written word.

Now would be a good time to mention that I’ve shared more than 20 Tab Benoit concerts with both the older and younger generation of my family over the span of 20 years.

Authenticity in Benoit’s music is a given but wasn’t always that way. The earliest entries of his discography (1992-1994) reveal a much more generic blues rock guitar approach and writing style. His singing voice had also yet to mature.

That all changed with “Wetlands” (2002). He admitted to me in an interview years ago that recording the disc was the pivotal moment of gaining both a singular voice and artistic freedom. (The gradual loss of Southern Louisiana’s wetlands is a cause very dear to Benoit. Check out his non-profit Voice of the Wetlands for music and more).

His discography has turned up a lot of aces since “Wetlands,” with the New Orleans project “The Sea Saint Sessions” and “Fever for the Bayou” earning special mention. His most recent “Medicine” is probably his hardest rocking (and one I’ve surprisingly been able to get teenagers interested in).

In preparation for both this column and the New York concert, I’ve been on a Tab Benoit listening-binge. As I type this, I’m shocked at how moving the solo on “These Blues are All Mine” is. It’s a song I’ve heard hundreds of times and yet find myself getting lost in the emotion of the guitar narrative.

Same goes for his singing. The other night in New York I sensed an uncertainty when he began the immortal Otis Redding’s “These Arms of Mine.” It was followed by a pretty quick sigh of relief when Benoit acquitted himself masterfully on the classic.

He collaborates frequently. His “Whiskey Store” (2002) disc with Jimmy Thackery is pretty great. I would put “Homesick for the Road” (1999) with Kenny Neal and Debbie Davies only slightly behind it. He meshes absolutely perfect with Cyril Neville on “The Blues Is Here to Stay.”

Even without Neville, the song was a highlight in New York. To wit:

“What would this world be without BB King/

Without Bessie and Big Mama struttin’ their stuff?

There’d be no Elvis no Jerry Lee/

A young Eric Clapton would have never crossed the sea/

Without old Lightnin, Jimmy Reed, Muddy Waters to grow up on/

Hey the Beatles and the Stones they’d of never left home, no no/

The blues is the gospel of the common man/

The story of a people in a hostile land

Built on a foundation that will never fall.”

I won’t even attempt to say it better than that.

The next Swampland Jam takes place April 23 in New Orleans to kick off Jazz Fest. 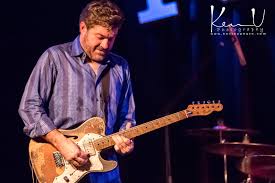 Welcome to “Plutonic: Melodic and Harmonic,” a new semi-regular feature that will spotlight a different guitar player ranging from relatively new discoveries to huge guitar heroes (we are thinking John Frusciante for the next...

END_OF_DOCUMENT_TOKEN_TO_BE_REPLACED

Reviewed & Written by Ray Hogan “Bolden: Music from the Original Soundtrack,” Wynton Marsalis   This space was originally meant to review my most anticipated movie of the spring, “Bolden,” the story of one of  jazz music’s...

END_OF_DOCUMENT_TOKEN_TO_BE_REPLACED

An Elegy for Dr. John

A musician as unique and authentic as his hometown New Orleans By: Ray Hogan “There he goes. One of God's own prototypes. A high-powered mutant of some kind never even considered for mass production. Too weird...

END_OF_DOCUMENT_TOKEN_TO_BE_REPLACED

The City That Care Forgot. NOLA. - By: Ray Hogan. New Orleans has its share of nicknames. But one describes the city's unique place in the country, and for that matter, the world. Many musicians have told me they...