Packed with activities and attractions, it’s difficult to really go in the wrong direction upon arrival in New Orleans. There are many places that have lived up to the hype for decades, and there are new, experimental spots that have quickly gained acclaim as well. Below is an eclectic list of must-see attractions.

Bakery, Bar, American, $$$
© T.Tseng / Flickr
Located along Bayou St. John in the Mid City neighborhood of New Orleans, Parkway Bakery & Tavern is a New Orleans institution. Parkway first opened its doors in 1911, operating as a bakery, and in 1929, the shop added ‘poor boy’ sandwiches to the menu to attract workers from the nearby American Can Company. Parkway Bakery and Tavern shut its doors for about 10 years following the closing of the American Can Company, but opened under new ownership in 2003. Today, Parkway has a full bar and a menu of 25 different varieties of the sandwich.

History Museum, Theater
The National World War II Museum (formerly known as the D-Day Museum) is a top-ranked tourist attraction in New Orleans. Congress considers the museum the official WWII museum of the United States. This popular historical monument is located downtown and houses interactive exhibits, restoration works, a period dinner theater and restaurants. Established in 2000, the National WWII Museum is an incredible place to experience and learn about World War II and honor the heroes who sacrificed their lives for the world and their country. Visitors can witness the efforts of civilians and the combat experience of soldiers. Guests can view collections of wartime bombers and aircrafts while touring the museum.

Deli, Market, Grocery Store, Italian, $$$
Muffaletta from Central Grocery &amp; Deli, courtesy of Central Grocery &amp; Deli
In the center of the historic French Quarter is the Central Grocery & Deli: the place where the muffuletta was born. This family-owned, Italian-American grocery store located on Decatur Street was founded in 1906 by Sicilian immigrant Salvatore Lupo – the progenitor of the muffuletta – and has since been among the top spots to visit while touristing around the Crescent City. Central Grocery’s muffulettas are delicious because the sandwich is prepared with fresh, in-house sliced meats and locally baked handmade bread – however, what makes them particularly special is the family’s century-old Italian olive salad seasoning. If you love their creations so much you wish you could take them home, know that they do nationwide delivery, too. 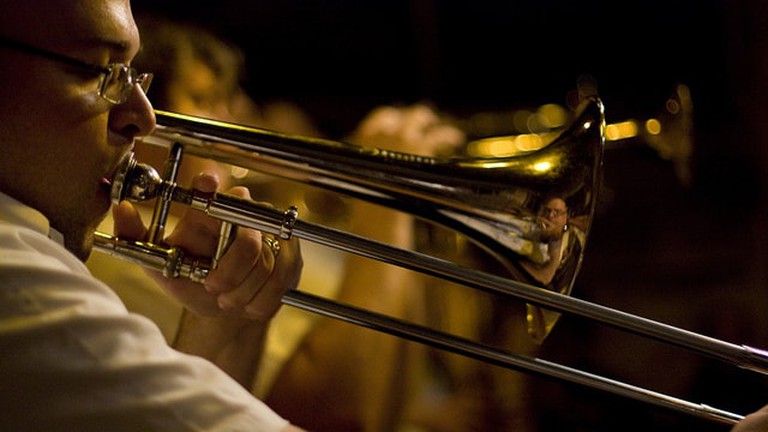 Encompassing traditional New Orleans jazz, Preservation Hall is a cornerstone of music and culture. It was established in 1961 to honor traditional New Orleans jazz. Every night, patrons can witness the wonderful musical evolution of jazz culture. The popular bar hosts a variety of musical performances, including gospel, hip-hop, bluegrass and rock. The best aspect of Preservation Hall is its non-profit affiliation. This is more than a music hall, it is a place for the community; they engage with the local community helping with education and social programs.
MAPLE LEAF BAR
Music Venue
Maple Leaf Bar is a casual, local favorite hangout that stays open late and hosts live music until the wee hours, along with their sweaty, adoring fans who cram into this intimate space with reckless abandon. Sometimes dubbed simply “The Leaf,” this bar and music venue has been a consistent favorite for locals, students from the nearby universities, and visitors, especially on Tuesday nights when it hosts the much-beloved Rebirth Brass Band. Other than being a popular music bar, it also hosts special events, including crawfish boils when it’s seasonably appropriate, and it is the after-party hotspot for the annual “Midsummer Mardi Gras” parade in August.
JACKSON SQUARE – FRENCH QUARTER Arguably the most famous area in New Orleans, the French Quarter is home to a number of street performers, bars, shops and restaurants, all in one historic location. However, Jackson Square, the Quarter’s park, has been a National Historic Landmark since 1960, offering gorgeous views of the historic buildings. It’s also a site that plays a major role in the city’s history as the site where in 1803 Louisiana officially became U.S territory following the Louisiana Purchase from France.
CAFE DU MONDE
Cafe, French, $$$
Randy P Schmidt / | © Culture Trip

No trip to New Orleans, especially for first-timers, is complete without at least a quick stop at Cafe du Monde for an order of beignets (a signature French pastry that is covered in a generous serving of powdered sugar) and a cup of cafe au lait. In proximity to the Mississippi River, Cafe du Monde is also a place to soak in the sights and sounds of street musicians.

Not much has changed since the ’70s at New Orleans famed Tipitina’s music venue, which continues to draw in iconic local and national acts who have been known to jam well into the wee hours. Its name is a tribute to iconic musician Professor “Fess” Longhair, who regularly performed there until his death in 1980. It’s a place that draws in a diverse crowd, including students and aging hippies, who converge over their love of live New Orleans music in a no-frills atmosphere. One of the largest art collections in the South, the Ogden Museum of Art is a must-see for art aficionados or anyone with a casual interest in soaking up some of the region’s diverse artists. The museum offers educational programming for all ages, as well as an acclaimed music series held every Thursday in its atrium, and it’s located within walking distance of restaurants, shopping and the French Quarter.
Previous Post
Next Post

The Bali Diaries: Ubud Edition I've been to over 40 countries (not that I'm actually counting...), and my favorite place that I can't get enough of is: Bali, Indonesia. I've been there twice, am planning...

END_OF_DOCUMENT_TOKEN_TO_BE_REPLACED

Belize it or not…

Belize it or not... A new year means new destinations and the adventures that go with them. I usually try to escape the winter for somewhere warm (typically the Caribbean, Mexico or Central/South America) right...

END_OF_DOCUMENT_TOKEN_TO_BE_REPLACED

Welcome to the second installment of “Plutonic Melodic and Harmonic,” a regular feature in (Music That Really Matters) that will spotlight guitarists from across the globe and span the musical map. Tab Benoit is from...

END_OF_DOCUMENT_TOKEN_TO_BE_REPLACED

Tacos & Tequila in Mexico City Mexico City (Ciudad de Mexico / CDMX) has been having a moment for a while, and rightly so. This city, the capital of Mexico (in case that wasn’t obvious…),...

END_OF_DOCUMENT_TOKEN_TO_BE_REPLACED

Most to Least Stressed Cities USA

Stress is inevitable. Everyone experiences some type and level of it. But it’s not always a bad thing. Certain kinds of stress can have positive effects on a person’s well-being, at least in the...

END_OF_DOCUMENT_TOKEN_TO_BE_REPLACED

Reviewed & Written by Ray Hogan “Bolden: Music from the Original Soundtrack,” Wynton Marsalis   This space was originally meant to review my most anticipated movie of the spring, “Bolden,” the story of one of  jazz music’s...

END_OF_DOCUMENT_TOKEN_TO_BE_REPLACED

An Elegy for Dr. John

A musician as unique and authentic as his hometown New Orleans By: Ray Hogan “There he goes. One of God's own prototypes. A high-powered mutant of some kind never even considered for mass production. Too weird...

END_OF_DOCUMENT_TOKEN_TO_BE_REPLACED

The City That Care Forgot. NOLA. - By: Ray Hogan. New Orleans has its share of nicknames. But one describes the city's unique place in the country, and for that matter, the world. Many musicians have told me they...

END_OF_DOCUMENT_TOKEN_TO_BE_REPLACED

Top Things to Do in Dublin One of Europe’s oldest cities, Dublin is a vibrant urban hub full of culture and character. Here are the top things to do and see.   The Republic of Ireland is...