“Welcome to “Plutonic: Melodic and Harmonic,”

A new semi-regular feature that will spotlight a different guitar player ranging from relatively new discoveries to huge guitar heroes (we are thinking John Frusciante for the next installment). We hope to not only rave about musicians we love — although there will certainly be a lot of that — but examine careers, approaches and lifestyles from different perspectives.

Our inaugural subject came to me at 33,000 feet. Thumbing through the current issue of Guitar World magazine on a flight to Plutonic headquarters (sunny South Florida) I came across a featurette on Turkish metal — among many other approaches — stylist Demir Demirkan. Given Plutonic’s connection to Turkey and my own 35 years as a metalhead, the universe was screaming pretty loud over the Atlantic Ocean.

I spent a few days searching out his music and soon realized Demir Demirkan (name translates in English as “Iron Ironblood”) is a bonafide guitar hero, hard rock is at his core but he’s accomplished so much more (traditional Turkish music, movie scores, symphonic work, etc.).

His brand new release is “Elysium in Ashes,”  the first in his quarter-century career to be written and sung entirely in English. This would be a good time to mention he started in the insanely good Turkish metal band Mezarkabul (known in Turkey also as Pentagram) whose album “Trail Blazer” (1992) I would stack against most American and British heavy metal of the time. He also studied at Musician’s Institute with Scott Henderson and Frank Gambale. Last year I saw the Generation Axe tour with Steve Vai, Yngwie Malmsteen, Nuno Bettencourt, Zakk Wylde and Tosin Abasi. Demirkan can certainly hang with that crowd but to throw him into a guitar hero bag would be to limit the scope of his discography and talents. He currently resides in Austin, Texas.

Here is an email interview that should tell you a lot about this talent deserving wider recognition.

Q: Music is said to be a universal language. You’ve covered an incredible swath of music that transcends cultures, ages, styles, techniques and emotions. What, if anything, have you found to be a common denominator? There’s a world of music that has thrown Western theories of the 12-tone basis to the wind.

A: To answer your question right off the bat, the common denominator is human emotion. Forget genetics, race, sex, cutlure or geographic upbringing. Human emotions are universal and are nurtured with the unique human experience we all go through as individuals. I play the same electric guitars as my American, European or Asian peers do, broadly through the same effects and amplifiers. Yet we all convey different music that we channel through our souls and our fingers.

Q: How do you find or search for the right mix between technique and feel?

A: It is an ever-building helix with two pillars just like DNA. One pillar is technique, the other is the feel. They are interconnected like a climbing ladder and go hand in hand as we evolve as musicians, both being necessary and equally important. You can’t have one without the other. It would be a broken DNA which couldn’t support life.

Q: What are the basic things the rest of the world should know about Turkish music?

A: If you would want to interpret Turkish music with a Western approach you would have to disregard the just intonation and use of the tempered scale and harmony. You would basically be left with modes, scales, and odd-meter grooves, especially with every different subdivision. On the other hand, if you would want to go into the just intonation universe and the linear scale approach, it would be like learning to live and breathe on a different planet. You would have to take the whole education from the roots up. It is doable, though. The harmony buildup is not really possible with this approach although there have been some experiments.

Q: Six strings, 22 frets. How do we continue to redefine music with wires and wood?

A: Guitar is only an interface. What is important is what you use it for. The purpose, form, technique, etc., I believe what’s important is to redefine and elaborate on the communication — meaning the music — we build using “The Guitar.” 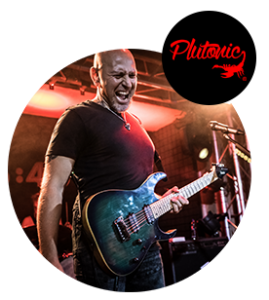 Q: Your latest disc is decidedly American hard rock in style. Was the process of creating it different this time around?

A: I wrote the whole thing in Austin, Texas, and went to Istanbul to record with buddies I have been playing with for 20 years. I think the subject matter of the songs and musical approach are defined as the way you hear the record because it all was conceived in Austin. We recorded the rhythm section live and I overdubbed the rest of the guitars and vocals.

Q: Your first band — Merzarkabul — reminds me of the golden age of heavy metal throughout the world (as we were living it in real time). Did you know at the time that something special was underway and did you ever imagine that the music would have cultural relevance decades later?

A: There was an underlying feeling and a relentless 100% belief in what we were doing. I don’t think we knew exactly what we were doing but we were discovering and exploring as we went along. It was an incredible learning experience which I believe is still going on. We are all very privileged and thankful to have lived through that and still keep all of the memories in our hearts.

Q: What is your practice routine on a normal day when you are not on tour or recording?

A: I usually mess with my guitar sound and find different ways to come up with the most organic sound that comes alive, either with analog or digital effects. I am a minimalist when it comes to gear and music so my main objective is always to optimize the situation.

Welcome to “Plutonic: Melodic and Harmonic,” a new semi-regular feature that will spotlight a different guitar player ranging from relatively new discoveries to huge guitar heroes (we are thinking John Frusciante for the next...

END_OF_DOCUMENT_TOKEN_TO_BE_REPLACED

Another of our Favorite Turkish Songs –

END_OF_DOCUMENT_TOKEN_TO_BE_REPLACED

Aries Rising / Aries Sun: We've made it to October, Aries! September looks like it had you pretty busy, as you were asked to check in on yourself to see if you've been living up...

END_OF_DOCUMENT_TOKEN_TO_BE_REPLACED

Robert Hunter, lyricist and Jerry Garcia’s writing partner for more than 30 years, died Monday. He was 78. Aside from Bob Dylan, Hunter was the greatest lyricist of the rock era. A poet and a...

END_OF_DOCUMENT_TOKEN_TO_BE_REPLACED

The Mystery of 13 – By: Michele Hogan

There are many different systems of numerology. Some place great emphasis on compatible numbers, correlations, single and compound, such as :1 +3   For this article let's take the number 13 in its compound form to...

END_OF_DOCUMENT_TOKEN_TO_BE_REPLACED

Thanks largely to the worldwide crossover success of Troy “Trombone Shorty” Andrews, the trombone is somewhat back in vogue. Truth is, it was never not in vogue in New Orleans, a city that celebrates...

END_OF_DOCUMENT_TOKEN_TO_BE_REPLACED

Loss of a Beloved Pet

END_OF_DOCUMENT_TOKEN_TO_BE_REPLACED

The Death of Sammy Handsome

. Plutonic will be posting its September issue piecemeal as we respectfully grieve the loss of our beautiful boy.