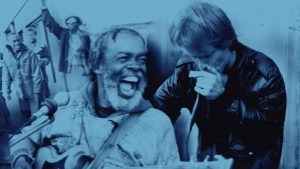 “Satan & Adam” is a music documentary of two street musicians who couldn’t be more different and who not only broke racial barriers but created some of the best and original blues music of the past 35 years.

Like any screenplay worth its salt, this real-life tale is told in three acts and couldn’t be more endearing, heartening and inspiring.

In 1986, Adam Gussow was a broken-hearted Columbia University student and harmonica player who boldly asked to sit in with Mr. Satan (born Sterling Magee), a former recording artist who had become a local legend on his particular Harlem block. (He played the blues unlike anyone before or after him).  “It’s a classic bromance,” says Gussow in the film. “It’s just two guys just having a great time. We’re an odd looking couple. So what?”

Occasional jams became regular street gigs and before long this young white college student and elderly African-American guitarist/trap drummer (a one-man band of the most original variety) were a neighborhood sensation. “We both found it intensely exciting to be making music on the street,” Gussow say. “ He had that before I came. That was his space but the two of us together got more people than he had by himself. He recognized that.”

For a little context: New York was a cauldron of racial tension in the late 1980s (think of “Do The Right Thing,” Howard Beach, etc.), so a mixed race musical duo playing the streets of Harlem was not only progressive but probably dangerous.

“To see two people that came from two diametrically opposite existences in the streets of Harlem, even if it violates the tribal code, it takes a lot of self-confidence, a lot of courage,” says the Reverend Al Sharpton. “Or a lot of ignorance to the environment you’re in.”

What happened next is the stuff of legend, except it really happened. The band caught the attention of not only New York but U2 (they are the only group U2 has covered on an album, “Rattle and Hum”) and the roots music community.

Success — at least by blues music standards —  followed. Satan & Adam opened for Buddy Guy at Central Park SummerStage and toured with Bo Diddley and appeared at high profile gigs such as the New Orleans Jazz and Heritage Festival. The duo recorded three CDs —  “Harlem Blues,” “Mother Mojo” and “Living on the River” — which this writer considers to belong in the canon of modern blues.

Act II. Erratic behavior overtakes Mr. Satan and, more so, his female companion. First the Magee and Macie(his lover) moved to Virginia, making gigs more difficult. By 2000, Mr. Satan had disappeared. Due to the diligence of director V. Scott Balcerek, who expertly weaves the narrative through historical footage and sheer determination and detective work, the story of Satan & Adam was far from over.

Without giving too much away, Act III moves from heart-wrenching to heart-warming, beginning with the director locating Magee (who had denounced the Mr. Satan moniker) living with family in St. Petersburg, Fla., in 2002.

Often times in life, music is so powerful that words fail in attempting to describe its emotional resonance. This documentary not only masterfully conveys that resonance but also tells a story of human love that is vital to anyone, anywhere.

Upon first viewing, it felt there was some intangible missing from the movie. Upon further reflection, this is nothing missing from this fine documentary. What is missing is New York City and the pre-gentrification culture that truly made it the greatest city in the world. Those days may not come back in our lifetime but, damn, was New York culture’s last gasp a great time to live through. As “Satan & Adam”, this unlikely duo was but one of the great ethical and artistic  stories of that era.

“I learned this much, creation has a purpose for everything…,” Magee says. “For us to figure out tomorrow is a waste of efforts. Let it flow, go with the flow, and it’ll work out.” 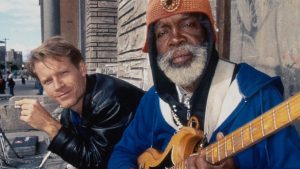 END_OF_DOCUMENT_TOKEN_TO_BE_REPLACED

Kedi – A Love Story to Istanbul and Cats

“Kedi”A film by Ceyda Torun/ Distributed worldwide by Oscilloscope Laboratories Essay/Review by Ray Hogan Visit the ancient city of Istanbul and one of your first observations will be the amount of cats roaming the streets,...

END_OF_DOCUMENT_TOKEN_TO_BE_REPLACED

Another of our Favorite Turkish Songs –

END_OF_DOCUMENT_TOKEN_TO_BE_REPLACED

Reviewed By: Ray Hogan I'm seeing double after this one. I hope you like it. Put some 50 hours into it... Halloween season holds a special place for a certain breed of movie fan. Ever since the...

END_OF_DOCUMENT_TOKEN_TO_BE_REPLACED

Thanks largely to the worldwide crossover success of Troy “Trombone Shorty” Andrews, the trombone is somewhat back in vogue. Truth is, it was never not in vogue in New Orleans, a city that celebrates...

END_OF_DOCUMENT_TOKEN_TO_BE_REPLACED

https://youtu.be/2pUlNfdnsAM Two weeks ago, I found myself up front for the New York Hardcore legends the Cro-Mags. This is the John “Bloodclot” Joseph and Mackie Jayson version -- the real version -- that call themselves...

END_OF_DOCUMENT_TOKEN_TO_BE_REPLACED

“The Revelation of Lee ‘Scratch’ Perry” By Ray Hogan

A Steve Marshall film Streaming on Prime Review by Ray Hogan   Wikipedia defines him as an inventor above all else. It’s not only telling but correct Lee “Scratch” Perry has been reggae music’s certified lunatic-genius since the late 1960s...