The Real Reason Some People Get Hooked on Slot Machines

Research reveals that slot-machine seduction may have little to do with money.

My travel schedule often involves hitting the road before 3am in order to beat the traffic. Although the highways are empty, some establishments along the way are not. If I stop for coffee at a casino, in contrast to the deserted neighborhood outside, I step into a brightly lit, crowded room full of people from all walks of life. Upbeat music competes with the bells and whistles of the slots, but no one seems to notice. Nor do they notice each other; they are alone together, fixated on their own personal screens, watching the flashing lights and blur of brightly colored fruits, dollar signs, and other objects spin around during concurrent, personal games of chance.

What are they doing here in the middle of the night, away from their families? Research provides a potential answer; and it has nothing to do with money.

Gambling is one of many social and leisure activities available to the general public. Some forms of gambling involve socializing, evidenced by the buzz of excitement in workplace hallways and break rooms when the Powerball Jackpot comes around, as employees rush to contribute their dollar to a pool of money.  In other venues, sports lovers get together to place bets on players and teams, motivated by their genuine love of the game.

Many public events mix gambling with entertainment. Opening Day of the horse-racing season features the most outrageous hat contest, Mint Juleps steal the show at the Kentucky Derby, and accordingly, for many attendees, the focus is on mingling instead of gambling.

Even in casinos, many players like the social aspect of sitting at a poker or craps table where they can meet other people, and the potential to win money is only one of the perks. For others, however, gambling is addictive. Some have a mistaken belief that they are actually going to hit the jackpot. Others are not focused on money, but improving their mood. 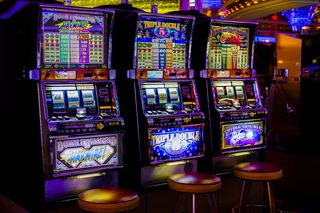 Appropriately, Mike J. Dixon et al. (2019), in conducting research into gambling as a form of escape,[i]began by noting the allure of slot machine play as a form of entertainment. Unlike lotteries, slot machine payoffs (when they occur) are immediate, often accompanied by attention-grabbing music and high-tech animations. In addition, slot machines are by nature unpredictable, due to what the authors refer to as a “variable-ratio reinforcement schedule.”

They focused on players who entered the “slot machine zone,” a state of absorption during which the game dominates their awareness, causing time to pass by without notice, a state many players find extremely pleasurable. Unfortunately for some, however, despite the similarity to the concept of “flow” in positive psychology, slot machine-induced flow often leads to negative consequences—in terms of time management and monetary loss.

The Seduction of Slots: Depression and Dark Flow

Dixon et al. describe the phenomenon of becoming totally engrossed in playing slots, forgetting everything else in their lives, as a state known as “dark flow.” They note that this state of absorption often leads to “dark” consequences such as spending more money than planned. Yet dark flow itself was linked with positive affect while playing.

Studying 129 gamblers, they discovered that mindfulness problems unrelated to gambling were positively linked with problem gambling, depression, and dark flow while gambling. Specifically for people reporting significant symptoms of depression in daily life, dark flow produced increased positive affect while playing, thus explaining the seduction of slot machines as a means of escape. Accordingly, gambling problems were predicted by the combined effect of depression and dark flow.

If you find yourself sitting alone at a casino in the middle of the night amid a room full of strangers, this research can spark an examination between your motivation and mood. Because for some people, playing slots is more about escape than entertainment, seeking help for underlying symptoms is in order. If you suffer from depression, consider the variety of alternative outlets and healthier options designed to enable you to improve your mood, spend your time with your loved ones, and save your money.

How to Spot A Liar/ A Ted Talk

END_OF_DOCUMENT_TOKEN_TO_BE_REPLACED

Musings from a Vedic and Western Astrologer

Written By: Anne Beversdorf - published by Infinity Astrological Magazine, 2018 / 11.12.2018   We are a rare community, astrologers. We share a complete language system—the astrological language.  And we all love finding new friends who...

END_OF_DOCUMENT_TOKEN_TO_BE_REPLACED

The 7 Types of Toxic People To Avoid on Social Media

Robert Greene The 7 Types of Toxic People To Avoid on Social Media Smooth functioning of social life has always depended on the recognition of certain basic limits to behavior. We cannot simply say or do anything...

END_OF_DOCUMENT_TOKEN_TO_BE_REPLACED

Mentors of Mine -Fred Steinmann Astrology

https://youtu.be/ukpjIOBDGms A podcast for all.

END_OF_DOCUMENT_TOKEN_TO_BE_REPLACED

Am I Jealous? How to Stop It.

Authored By :Richard Smith Ph.D. (PsychologyToday) What is the Difference Between Envy and Jealousy? These commonly felt emotions are often confused with each of one another. Ask ten different people and you might get ten different views...

END_OF_DOCUMENT_TOKEN_TO_BE_REPLACED

Sun Tzu was a legendary military strategist in ancient China and he is the author of the famous book, The Art of War. He was a master of “soft power” and the father of...