The North Mississippi Allstars have been one of the most consistently great and eclectic concert acts of the last 20 years. Interestingly, their discography has followed an inverse trajectory with their debut “Shake Hands With Shorty” (2000) being their hands down best and “51 Phantom” (2001) and “Polaris” (2003) taking the second and third spots. “Prayer for Peace,” released just two years ago, was all but overlooked.

Of course, the band — essentially brothers Luther (guitar) and Cody (drums) Dickinson —  hasn’t regressed but consistently pursued new avenues without abandoning its blues/folk/jam rock core. Naturally,  a lot has also transpired within the band during those years. They lost full-time bassist Chris Chew, who went back to more stable career work. On the plus side, Luther Dickinson has become a bonafide and encyclopedic yet completely unassuming guitar hero. Cody has grown into a musician for all seasons, adding guitar, keyboards, wash-board and more to his already otherworldly drum skills.

So the news of Luther and Cody Dickinson returning to their roots — thanks in large part to unearthed photographs of their early, heady days of the Mississippi Hill country revival — was met with guarded optimism.

The world lost just about all of that area’s legends (R.L. Burnside, Othar Turner, Junior Kimbrough and the Dickinson’s legendary father Jim) in the past 20 years. But as Luther and Cody exemplify, the new generation is ready to contribute and further that legacy.

“Up and Rolling” is both a celebration of the past and present. The album cover (do we still call them that?) is presumably one of the unearthed photos and bears a strong resemblance to that of “Shake Hands…” The Dickinsons produced the set at their late father’s famed Zebra Ranch in Independence, Miss. Meanwhile the hill country legends are again represented one or two generations removed. Singer and fife player Sharde Thomas is the granddaughter of Othar Turner and is essentially a de facto member of NMAS for this project, proving her worth from the opening “Call the Gone,” a stomper that definitely recalls the band’s earliest sound.  The title track in its trance-like theme invokes the Kimbrough family sound and lyrically recalls a recklessly beautiful moment in time. R.L. Burnside’s grandson Cedric has forged a blues career of his own (the Dickinson’s have employed various members of the Burnside clan at different periods). Here he helps bring listeners to church on Thomas Dorsey’s “Take My Hand, Precious Lord,” trading lyrics with a growingly confident Cody — for what might be personally my favorite track. Burnside makes a second appearance on the rollicking “Out on the Road,” which includes some more of Luther’s one-of-a-kind guitar soloing. Forever soulful, never showy. For someone who grew up in the guitar hero era, you have no idea how fresh his approach can be. 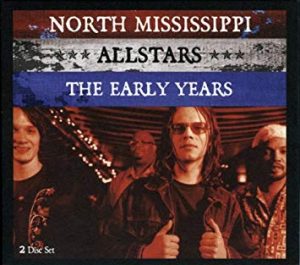 “Mean Old World” is a departure that pays respect to another inscrutable legacy: that of Duane Allman. It’s also the song that will likely gather the most attention thanks to the inclusion of Duane Betts (Dickey’s son) and Jason Isbell, who I’m convinced has become the most important singer/songwriter of the past 10 years. It’s a driving, gritty approach with serious six-string acrobatics. It’s also a reminder of the jammed-out feel of that Luther is able to summon at will. He does the same on “Call That Gone,”

That Dickinsons and Mavis Staples established a mutual admiration society long ago. Here she takes us to the church of our choice on her family’s “What You Gonna Do?” As usual she oozes class, dignity and soul.

It would be wrong and overly simple to say NMAS and friends are trying to relive their collective youth with  “Up and Rolling.” Instead they’ve established a group of key friends to celebrate that shared experience. To that end, “Up and Rolling” succeeds to no end. Sometimes, you can go home.

Robert Hunter, lyricist and Jerry Garcia’s writing partner for more than 30 years, died Monday. He was 78. Aside from Bob Dylan, Hunter was the greatest lyricist of the rock era. A poet and a...